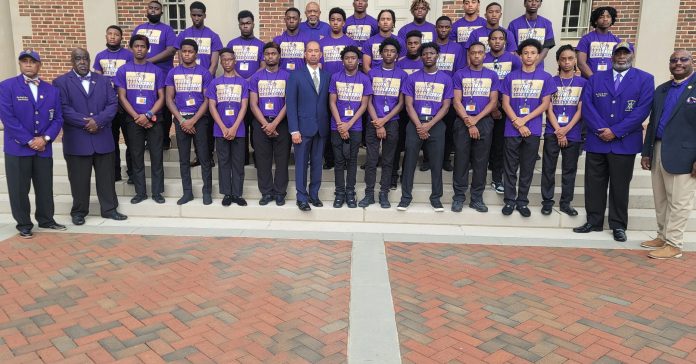 Montgomery, AL- The mentoring program of Sigma Phi Chapter of Omega Psi Phi Fraternity, Inc. mentoring program Manhood, Inc. more specifically The Omega Sparks participated in the 2022 International Youth Leadership Conference in Charlotte, NC to kick off the Conclave for Omega Psi Phi Fraternity, Inc.  The Omega Sparks Chairmen Brothers James Lovejoy and Robert Thomas prepared a first-class event with transportation of a plane flight sponsored by City Jet a private charter airline owned by President Ron Mays.  The event was free for young men in the 9th through the 12th grades, with men of Omega Psi Phi Fraternity, Inc. throughout the world assisting with facilitating the event held on the campus of Johnson C. Smith University in the New Science Center.

The event which was also sponsored by Regions Bank as well as Coca Cola consisted of workshops that included self-enhancement, goal setting and academic success, health and wellness, Manhood 101, financial literacy, social and personal responsibility, civic engagement and conflict resolution.

Brothers Lovejoy and Thomas should be commended for coordinating such a first-class event that in OMEGA spirit provided a memory of a lifetime for the young men which prayerfully planted a seed of pursuing their dreams to do whatever their hearts desire.