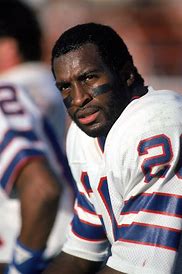 Joe Cribbs just like in his last name, is a great athlete from Alabama, who was able to play professional football. Joe Cribbs was born in Sulligent, Alabama on January 5th, 1958. Cribbs was about average height but I know first handedly, that height doesn’t define the player. You have to have the will to win and work as hard as possible. It’s like the old saying, “mind over matter”. This just means that you have to be mentally strong to be able to respond to all circumstances.

Cribbs was a very talented athlete in high school, which led him to receive many offers to play football in college. He played running back and he earned a scholarship to play at Auburn University. He played at Auburn as a freshman in 1976.Like most true freshmen in college, he didn’t get to play a lot of minutes in his first round of college. Some freshmen aren’t able to adapt to not playing when they first get to a school but Joe didn’t let not playing a lot in his first year affect him. Due to him not playing a lot at this time, his rushing yards didn’t even make it over 200. However, this changed in his sophomore year and he increased in stats. In the offseason Cribbs was determined to play in more reps in his sophomore season. He increased his workouts and he came up with a plan to improve his game. One thing I know about being a college athlete, is that it’s basically a 24/7 job. You are usually working out, conditioning, training and watching film. Watching film is one of the best things you can do to develop your game because you can break down play by play to better evaluate your game. At the end of the season he rushed for 872 yards on 161 rushing attempts, with 4 touchdowns. As an athlete, you want to increase your talent every year, so the older you get, the better you become. His junior year was for sure his breakout season.

This was by far his most outstanding season. For college football, usually their third year is crucial because professional football teams become interested and are scouting college talent. Also, football players can’t enter the draft until 3 years removed from their high school graduation class. In Cribbs’ junior year, he rushed for 1,205 yards with 253 attempts and he scored 16 touchdowns. Every game that season, he averaged over 100 rushing yards a game. Averaging 100 yards a game is very good because this means the football is getting up field without the Quarterback having to make plays. Figuratively speaking, Cribbs was a “dog” in college. The term, “dog”, refers to him being a straight monster on the field and playing hard every game. Cribbs had very shifty moves and he was one of the top prospects at running back.

Cribbs was drafted in 1980 by the Buffalo Bills. He was drafted in the second round of the NFL Draft. However, just like in college he worked hard and became the starting running back for all 16 games during his rookie season. He scored 11 touchdowns in his first season. He also was AFC Rookie of the Year and he earned a spot in the pro bowl. Getting a chance to play in the pro bowl as a rookie is a great accomplishment because it is very unlikely for this to happen. He played 5 years with the Bills but after having contract issues, he signed with a (USFL) team, called the, “Birmingham Stallions”. It’s also very important to lead off the field. Cribbs became president of Team Alabama, commissioner of the United National Gridiron League.

Cribbs’ dream was to get back in the NFL and this became true when he signed with the San Francisco 49ers in 1986. And the next year he split seasons with the Indianapolis Colts and Miami Dolphins. Cribbs made it to 3 pro bowls and he retired from the game of football shortly after his time with the Dolphins. Cribbs didn’t retire as a Hall of Famer but his career in the NFL was very memorable.