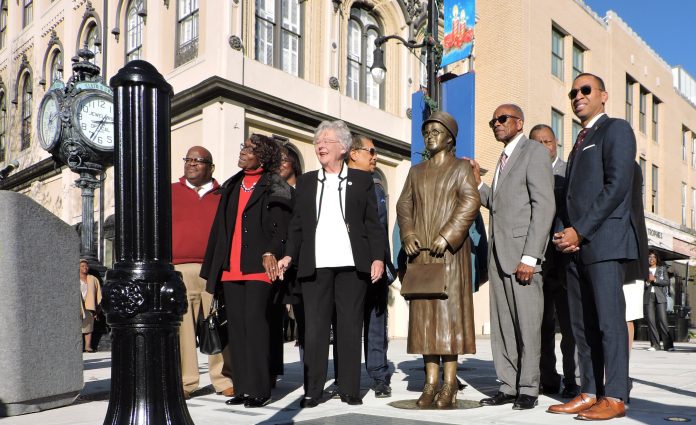 Community leaders marked the 64th anniversary of Rosa Parks’ courageous stand and subsequent arrest with the dedication of a life-size, bronze statue of the seamstress, as well as four historic markers honoring the plaintiffs in the landmark Browder v. Gayle case.

“To stand here today as Montgomery’s mayor where Mrs. Rosa Parks stood defiant against systemic injustice infecting our community and our country speaks to the magnitude of this moment and the progress achieved in our city,” Mayor Steven Reed said. “This progress, coupled with the dawn of a new era of reconciliation and revitalization, underscores Montgomery’s status as the Birthplace of Civil Rights and a light unto the world.”

The statue stands near Montgomery Plaza downtown – just feet from the spot Parks boarded the now infamous city bus on Nov. 26, 1955. The City of Montgomery, the Montgomery County Commission and the State of Alabama Department of Tourism funded the project and commissioned Montgomery County artist Clydetta Fulmer to complete the work in conjunction with city and state bicentennial commemorations.

“This statue has been a long time coming and Mrs. Rosa Parks is more than deserving as she represents all of the many foot soldiers who sacrificed their lives and families to make a change. She is standing where she belongs at the heart of Montgomery where the historical Civil Rights Movement all started,” said Montgomery County Commission Chairman Elton Dean. “This is a great day for Montgomery County. The seeds she planted are ever continuing to be harvested. Because of Mrs. Parks courageous stance, I am able to hold the position I do as Chairman of the Montgomery County Commission. She paved the way for us, both minorities and women, we stand on her shoulders and we are forever grateful.”

With over 40 years of experience, Fulmer has completed more than 100 commissioned sculptures for commissioning entities, including the U.S. Botanic Garden, the City of Montgomery and Montgomery County. The Rosa Parks project required extensive research. Fulmer studied photographs, period shoes loaned by the Alabama Shakespeare Festival (ASF) and even consulted Allena Curry Norman, a close friend to Parks and the hairdresser for Civil Rights luminaries like Coretta Scott King and Juanita Abernathy. Alabama’s Fairhope Foundry cast the statue.

MABCA has played an integral role in promoting public art throughout the community. These projects include Marching On at Five Points, The Marching to Montgomery sculpture at the City of St. Jude, A Mighty Walk from Selma mural at Montgomery and Lee Streets, the foot soldiers crosswalk on Dexter Avenue, The Wright Flyer aircraft replica, Unforgettable mural on Maxwell Blvd., The Rainbow Soldier at Union Station, Daedalus at Maxwell AFB and many more.