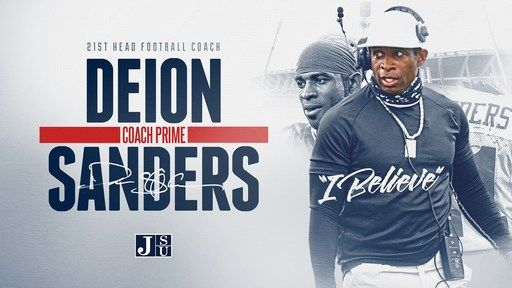 In the world today, it is evident that it’s tougher to do just about anything in Corporate America. In turn this is why movements such as “Black Lives Matter” have become so big. These movements were put in place not just to try to give people of color a fair shake, but to also raise awareness on police brutality against people of color that seems to happen too often today. These are all good ideas for diminishing systematic racism, but I feel Deion Sanders a.k.a “Primetime” has taken the biggest step of all. Deion Sanders was named head football coach at Jackson State University Wednesday, September 23, 2020. The problem with systematic racism is that it starts at the top, these type actions can still take place because the people at the head of our most powerful agencies allow them too. In Deion’s case I feel that he is putting himself in position to make a difference in young black men’s lives. Jackson State University is an HBCU, and these schools are known for their black heritage and majority of the school being made up of people of color.

Deion Sanders was a standout football player at Florida State, where he played defensive back, and also returned kicks. From his freshman year on the field the buzz was high around Deion for the unhuman like plays that he made on the field. Perhaps he was more famous for his swagger of the field. Deion was in college in the 1980’s, where times were pretty dull. Well, you could say Deion single handedly lit it up. With his jerry curl and big gold chains he brought a new element to football that still lives on to this day. You can say Deion was the pioneer for everything we see in pro athletics today. Deion was then drafted to the NFL to the Atlanta Falcons where he showed out from day one with his unique swagger and even more unique rookies season where he caught everybody eye.

In America today white privilege is a major problem, any one group of people could never be looked as superior when there are people of a different race that can do the job just as good or even better. With that being said this is American and I don’t see this changing anytime soon. But, with more people like Deion I feel that we are on the right track. We need more people of color in these higher positions in America to make some decisions for the people that need help the most. If we don’t have someone in these higher positions how are we supposed to ever have someone look out for us? Most of the people in these higher positions are white and have grown up with white privilege so how are we supposed to expect them to understand the problems that low class people deal with in America? We need someone that has been through it and experienced it first hand to put themselves in such as Deion so that their voice can be heard for the people that have no voice.