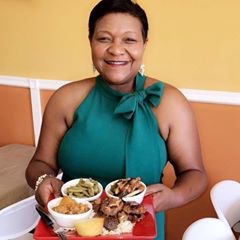 Montgomery, AL- Ms. Teresa Jackson is the owner of J.W. Beverette’s Soul Food restaurant which is located at 1172 South Decatur Street here in Montgomery. Ms. Jackson is a woman with a mission. She is not only cooking and serving food to a hungry public, but she is giving back so others can grow and do what they love to do as well.

She is not only a proud restaurant owner, but she also owned an apartment building which did house homeless veterans. For six years, she says that the building was used for this purpose and those individuals would be able to receive 24-hour care. She strongly believes that no veteran should be homeless especially since they served their country. “No veteran should be homeless because for anyone to give their life for their country and other people, they should never be homeless,” she declared. It is statements like that one that truly inspire and encourage fellow veterans like myself to continue to help my fellow brothers and sisters in arms.

Before she became the soul food queen that we know and love today, she was a teacher. She goes on to say that she did have dreams of opening her own restaurant. From working in the education field, writing for a Congressman, and even worked a couple of non-profits, she came unto the realization that she was going to do what she wanted to do all along. As the good book says in Habakkuk 2:2: Write the vision and make it plain. That is exactly what Ms. Jackson did.

COVID has come and turned everyone’s world upside down, even J.W. Beverette’s. Ms. Jackson says that because her store was small, she remained open by deliveries and to-go orders while the other businesses closed. But once businesses began to reopen, she began to see what was one of the most difficult things she ever encountered. “I think the most difficult thing now is finding and keeping employees,” she explained. She goes on to say that when you are not making enough money, no one wants to work, but once you get back in the swing of things, then they will come through. For those who have a job, please don’t leave your employer by themselves because they had no control over COVID or anything else that could happen. If you have to, just tough it out and see what happens.

Being a black female business owner does come with its own set of challenges. One of those is resources. She says that in spite of whatever obstacles may stand in her way, she is hanging on in there. She exclaimed, “This has been strictly us, making on a wing and a prayer!” She also knows to overcome these challenges; she is relying on God’s grace to get her through it all. “Life is short. Do the things that bring you joy and most impactful,” she advised. Thank you, Ms. Jackson, for that.

She also credits her grandparents and church family for the early influence of service to others. “My grandparents worked at a restaurant throughout my life. My grandmother was the mother to 12 children, so she spent a lot of time in the kitchen,” she explained. She went to say that seeing them along with her church family being involved in different fundraisers such as selling plates to help assist ones in the community would play a huge role in her life then and now. “This is something that I enjoy and what I can do to give back,” she said. The ASU alum also says she gives a portion of her business’s proceeds to her school, where she graduated from in 1994.

When it comes to the name of her restaurant and its location, it hit close to home. The “J” stands for Jackson which is her and her father’s last name, the “W” stands for West which is her mother’s maiden name, and “Beverette” is her paternal grandmother’s maiden name, and Montgomery is home according to her. “Montgomery feels like home to me and being close to the university was a huge plus for me,” she explained. By being in close proximity to the school, she has hired numerous students to come and work for her. She also says that the students have been instrumental in teaching new things as well as her teaching them new things too. “We are learning from each other,” she implied.

Like anyone with a business(es), she knows you must have a game plan for the years to come, and she definitely has one. She says that in 10 years she wants to be able to do even greater things for her business. “I really would like to be able to franchise my business. That has always been my plan even before I opened the doors of the restaurant,” she said. She goes on to say that while it will require hard work, personal sacrifice, and much prayer, she is willing to do all that she can see it come to pass.

Ms. Jackson is a special kind of lady. Not only does she serve food, but she is willing to donate both her time and money in wherever they are needed. Whether it is her college, her community, the local food bank, and so many others, she is willing to serve. For someone who truly enjoys the service of others, it is only right that we pin her flowers on her for all that she has done, doing, and will do in the future. If you or someone you know would like to visit Ms. Jackson and try and enjoy her delicious food, she is located again at 1172 South Decatur Street here in Montgomery.