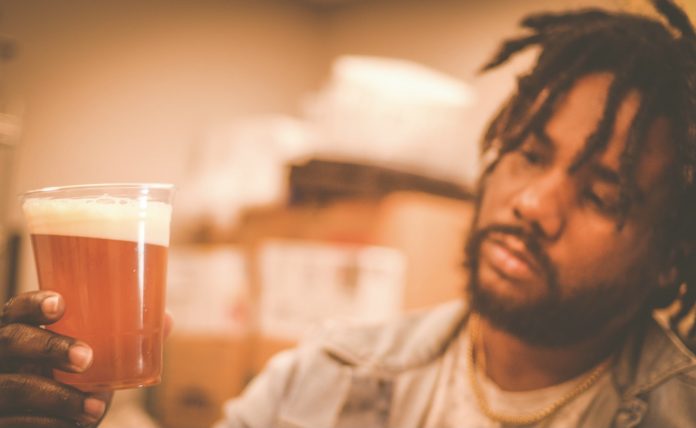 Montgomery Native Jeremiah Isaiah, Owner of Justified & Worthy Brewing Company, is known by some as the “painting prophet” and the “black brewer who came back home.”

At 19, he joined the Coast Guard to support himself and his family. He was the first one in his family to join that branch of the military. As he was looking for things to do in a new city where he was stationed, he met someone who introduced him to the brewery business.

“I loved beer, but I was only used to Budweisers, Bud Lights, and Colt 45s. I didn’t know about sophisticated beer. Once I tasted craft beer, I didn’t want to drink regular beer again,” he said.

Isaiah was drawn to the calming atmosphere and distinct tastes of craft beers. He made his first home-brew with the help of his mentor and began to visit different breweries to learn more about the business. Over the next 13 years, he continued to perfect his craft in creating his own beer.

“He was someone I had never met before in my life, and it turned into a really good relationship. He started taking me around to different breweries, and it was really cool. It didn’t matter what color you were; there were all types of people in these breweries,” he said.

While going to school for engineering and still in the military, Isaiah traveled to California to learn the art of micro-brewing. During his time there, he got into a tragic accident that changed the trajectory of his life.

“I was on a road bike at a stop light, and a car hit me and knocked me off the bike. I woke up three days later in the hospital. I couldn’t walk; I couldn’t do anything. At that moment, I’m thinking my career is over and I’ll never get to do the things I always wanted to do,” he explained. “I said to God, ‘I know there’s a purpose for me. I know this can’t be it. Whatever it is that you want me to do, just let me heal and I’ll do it’.”

Three days later, he began to regain feeling in his legs. After a week, he wanted to get up.

“I fractured a C7 in my neck. They told me only 13% of people survive that type of injury. After three months, I was able to leave the hospital walking,” he said.

Although Isaiah never planned to return to Montgomery after leaving, he came home to visit his family after his father got sick.

“Being around my family and friends again, it felt like home. I decided not to go back to California. Since I was out of the military at this point, I had to find a new career,” he said.

He read an article in 2017 on James Weddle who was helping entrepreneurs and reached out to him. From that meeting, they launched what is now Goat Haus Biergarten.

“I knew I wanted to start a business one day, and I believed in his vision. While we were building, conducting business, and making connections, I saw what the community was doing. I knew I wanted to do something like that. Every time I’ve gone to a brewery, I noticed how people connect – not over politics or controversy, but over the love of beer. From then, I knew I wanted to be the black man to start a brewery in my hometown,” Isaiah said.

He officially launched JW Brewing in 2021. He plans to open a physical location on the West side of Montgomery and partner with nonprofits in the area to evoke change in the area. Of all breweries in the country, only 1% are black-owned.

“Now, I have this community that loves me and made me love my city even more. I wanted to put what I love in the city I love. I’m trying to bring an experience that will shed light on community development, art, socializing, and loving each other,” he said.