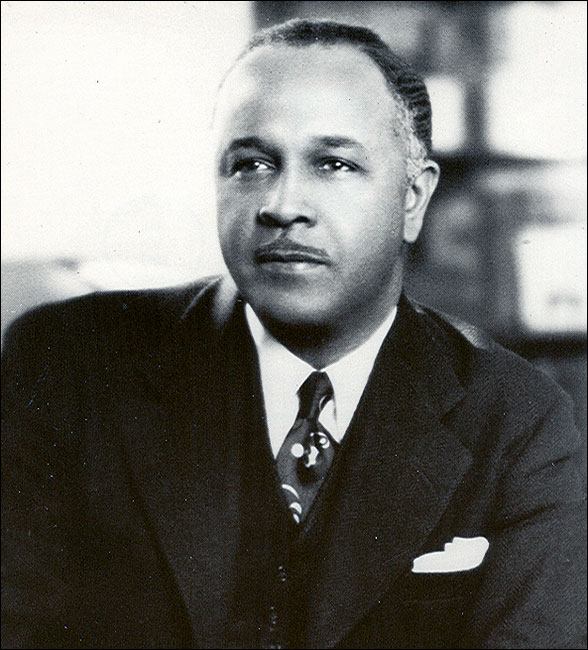 Percy Julian– a civil rights activist, entrepreneur, and steroid chemist- played an essential role in developing many of the steroid based medical drugs that are used today, including cortisone, hydrocortisone, and birth control pills. He is one of the first chemists to create pharmaceuticals that are plant-based. Although Percy Julian provided tremendous contributions to the world of medicine, there were many obstacles that he had to overcome to accomplish his goals.

Percy Julian was born on April 11, 1899 in Montgomery, Alabama. He was raised by his grandparents, who were former slaves. Julian attended an all black normal school through the eighth grade but was not allowed to attend high school because no high schools in his area accepted black students. Despite this minor setback, Julian proved that he could prevail academically without the public school system by applying and being admitted to DePauw University as a sub-freshman. Under the sub-freshmen criteria, Percy Julian was required to enroll in high school level classes in the evening in addition to his college classes to remain on the same academic level with his peers. Although the workload would seem impossible for the average person, Julian exceeded everyone’s expectations by graduating as valedictorian of his class with honors.

After graduating from DePauw University with a B.S. in Chemistry, Percy Julian worked as a chemistry teacher at Fisk University. He worked there for two years before receiving a scholarship to Harvard University to pursue his masters degree in organic chemistry. Julian tried to attain a doctorate degree from Harvard University as well, but the university did not allow African Americans to enroll in the doctorate program.

Percy Julian did not allow the discrimination of Harvard University to keep him from reaching his goals. He traveled around the world teaching at black colleges and received his Ph.D from the University of Vienna in Austria.

With his new doctorate degree, Percy Julian returned to DePauw University to conduct research; he created his first successful medicinal drug to treat glaucoma by extracting chemicals from a calabar bean.

Although this scientific breakthrough received great acknowledgement, DePauw University refused to hire Julian as a full-time professor because of his race. He left the university to pursue a job in his career field, but he was again denied employment because of his race. Julian was finally offered a job by the Glidden Company as a lab director. During his time at this company, Julian was able to invent more plant-based remedies. He used soy bean protein to create Aero-Foam, a product that would extinguish fires. He was also able to synthesize steroids, cortisone, and birth control pills from soybean oil.

In 1954, Percy Julian decided to leave the Glidden Company and establish his own laboratory- Julian Laboratories. He sold this lab in 1961 and became one of the first African American millionaires. After selling his business, Percy Julian founded the Julian Research Institute, a nonprofit organization dedicated to plant based chemical research. He managed this organization until he died of liver cancer in April of 1975.

Although Percy Julian is not widely known, his creations left a legacy. After his death, Julian became the first black chemist to be elected into the National Academy of Sciences; he was also inducted into the National Inventors Hall of Fame in 1990. In 1999, Percy Julian’s first chemical synthesis was named by the American Chemistry Society as “one of the top 25 achievements in American chemistry”.

With all odds stacked against him, Percy Julian managed to conquer every barrier that was meant to stop him. He rose above racial and academic hindrances to initiate breakthroughs in the worlds of chemistry and medicine. Percy Julian refused to let society define him as inferior because of the color of his skin. His determination and perseverance led him to become one of the most influential chemists in American history.