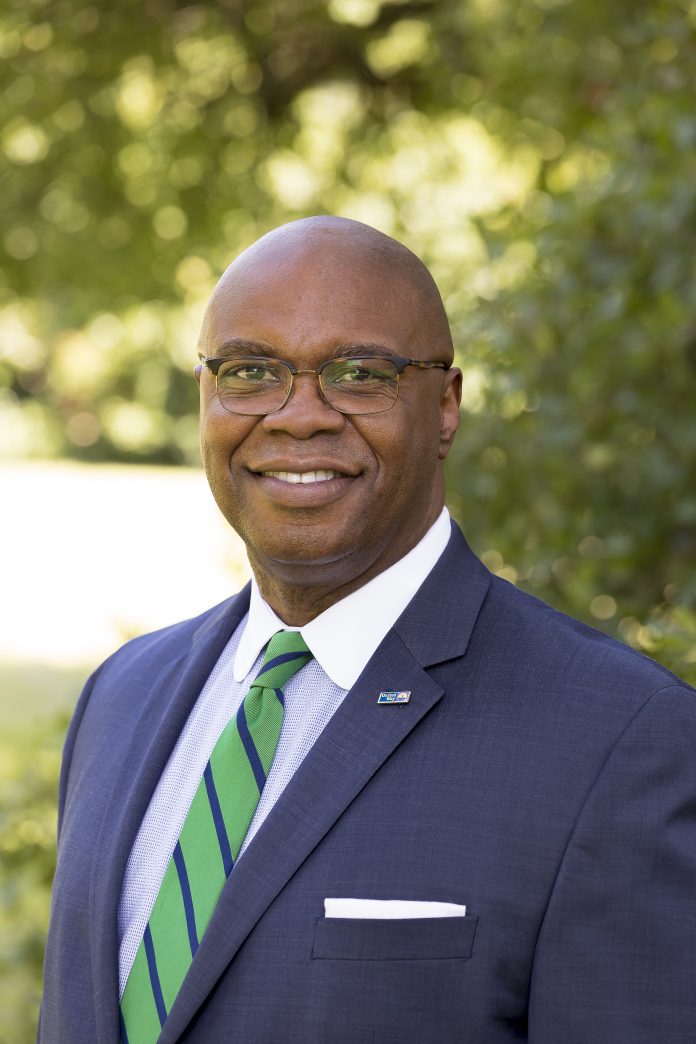 Ron Simmons, President and CEO of River Region United Way (RRUW), is a native of Montgomery and a 1983 graduate of Sidney Lanier High School. He is a graduate of Auburn University at Montgomery, where he received a bachelor’s degree in Liberal Arts with an emphasis in Marketing and Military Science. Simmons was commissioned as a second lieutenant in the U.S. Army Reserves from the Auburn University at Montgomery ROTC program in 1987. He is also a graduate of the U.S. Chamber of Commerce Foundation Institute of Organizational Management at the University of Georgia.

Before joining RRUW, Simmons worked in the nonprofit sector with the Montgomery Area Chamber of Commerce. He is also the founder of D.A.D.S (Dads And Daughters Saturday) and served on various boards throughout the community, including the YMCA of Greater Montgomery, East Montgomery YMCA and the Montgomery City-County Public Library, Brantwood Children’s Home, and Jubilee CityFest. He was also a member of the Economic Development Association of Alabama and a Leadership Montgomery graduate, Class XXVIII.

This mission of RRUW is to identify some of the most critical problems in communities, find the resources, and to solve them. “We are accountable for every dollar that we raise; that’s really the mission,” Ron Simmons said. “We are more than fundraisers: we are problem solvers.” RRUW identifies a need or issue in the community and raises money to fund programs and partners with other agencies to build programs to address the needs or issues in the community. “We’re looking for problem solvers to work together; we want to be a United Way of solving problems.”

The RRUW community involves collaboration and partnership between donors, agencies, the team members, and the volunteers. “2020 showed us that we had to do things differently and that we can’t go at it alone. We had to work together.” In 2020, Central Alabama Community Foundation (CACF) created a relief fund and invited River Region United Way to partner with them to provide funds for people who were struggling financially as a result of the COVID 19 pandemic. Simmons realized that people who were not even part of the River Region were getting involved through giving. While the RRUW received immense support from the community, one of their biggest challenges, aside from the pandemic, was campaign season. Still, the RRUW and CACF raised over half a million dollars in less than six months through their partnership. With these funds, they awarded over 180 grants to agencies who directly helped people, both individuals and families, that were negatively impacted by COVID 19 and to agencies themselves who were negatively impacted.

RRUW’s strategy is based on the foundation of “bringing community together.” Ron Simmons addressed a major obstacle in not being able to come to resolutions or make material impact on major community issues is having numerous nonprofit agencies or community partners all trying to work individually on the same issues, thus duplicating efforts. “We wonder why we have a lot of the same problems and why aren’t we moving the needle…well, it’s because we have a thousand needles that we are trying to move; we’re not agreeing on one big needle and one big group that’s moving the needle together.”

RRUW strives to be that organization to bring community partners together toward a common goal, which they refer to as a “Bold Goal.” One of the bold goals of RRUW is to ensure that every person has the right to achieve growth in financial stability, health, and a good education.

“A Bold Goal is a goal that is too big; we’re going to take a big step toward a goal that is too big for any one organization, one entity, or one individual to try to solve alone.” One example that Ron Simmons addressed is the problem of education. “The education problem is not an education/school system problem alone. It’s a community problem.” RRUW is hoping to partner with several local universities to provide internships and class credits to individuals. Ultimately, RRUW partners with the business community, governmental entities, the school system, educational agencies, and the community in general to take the upcoming generation from “cradle to career.”

RRUW is designed to bring communities together through a collective effort to solve problems using measurable benchmarks. Another issue that RRUW is addressing is financial stability and financial literacy. “We have people that just don’t know what to do with money,” Ron Simmons said. “If you don’t know, you don’t know. If you haven’t been exposed to it, you don’t know. How do you expect someone to know what to do and they haven’t been exposed to a checking account before?” RRUW is the hub for agencies to bring their resources together to address these types of issues.

The ultimate goal of RRUW is to be the leaders in the nonprofit world of service. “We want to be known as servant leaders in the community where we bring communities together to solve critical problems.”

“This is not an easy job, but it’s a rewarding job. It’s rewarding to know that we are here to help people.” For information about the River Region United Way, or to get involved, visit RiverRegionUnitedWay.org.