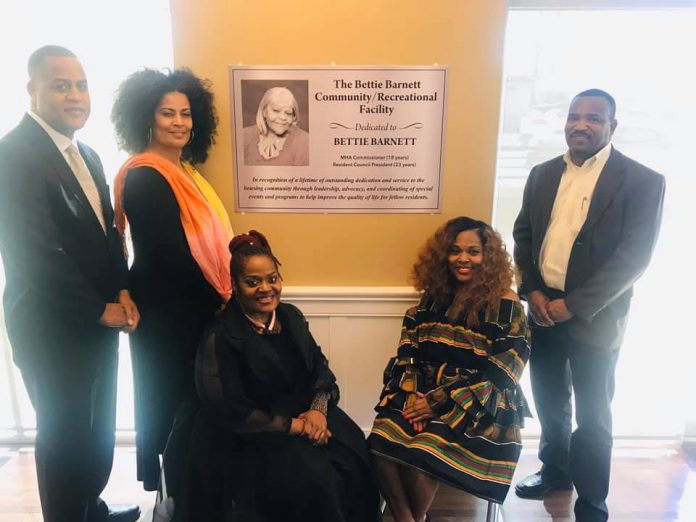 Montgomery, AL- The Montgomery Housing Authority is honoring the late Bettie Barnett, an influential community activist and advocate for the senior population, by dedicating the activity center at The Terrace Senior Living Facility in her memory.

Bettie Barnett, a native of Bullock County, Alabama, worked in the nursing field for over 30 years. After retiring from nursing, she began her true calling of working in public service.

Barnett was a resident in public housing for over 30 years. As one of the first African American families to integrate the Riverside Heights Housing Community in the late 1960s, she and her 7 children became assets to the public housing system. Though a struggling single mother of 7 children, Barnett was committed to serving her community. She served as a leading advocate for community members with the Montgomery Housing Authority. Seeing the lack of attention given to public housing and assisted living facilities, Barnett got heavily involved with the local government. She first reached out to former Representative John Knight to complain about the living conditions at The Terrace.

Soon, she was attending every community meeting and building relationships with political officials. She even built relationships with legislators in Washington, D.C., which helped her fight and win against local officials when they were planning to cut funding for The Terrace. “It was her work,” former Representative John Knight said, “which led to the complete renovation of the Terrace senior living facility.”

Later in life, she became a community advocate for seniors. She was well known and respected for her work as an organizer of events that aimed to improve the lives and living conditions of seniors in public housing. In recognition of her efforts, Barnett was appointed to the Montgomery Housing Authority (MHA) Board as a Commissioner by Councilman Tracy Larkin. During her tenure in this position, she started the “Get Out to Vote” campaign with seniors as well as yearly functions at the Terrace, such as the annual Black History Program and Valentine’s Ball at the Terrace, which became a model used by other facilities to implement programs for their occupants.  She was such an influential force within the MHA that former Mayor Todd Strange gave her the title of “Mayor of the Terrace.” Barnett continued her service as a commissioner until her transition on Oct 17, 2019.

According to her daughter, Sonya Wilson, Barnett’s motto in life was, “If I can help somebody as I pass along, then my living has not and shall not be in vain.”  Her dedication to serving others ignited the major renovation of several public housing and senior living facilities in Montgomery, including Victor Tulane Court (now Victor Tulane Gardens), Richard Terrace (now The Terrace), and Gibbs Village. At her homegoing service, public officials attested to her diligent work and service to the people of Montgomery County. In honor of the impact that she made and to continue her legacy, the community activity center at the Terrace will be named after her during the Black History Month activities that she originally established at the facility.