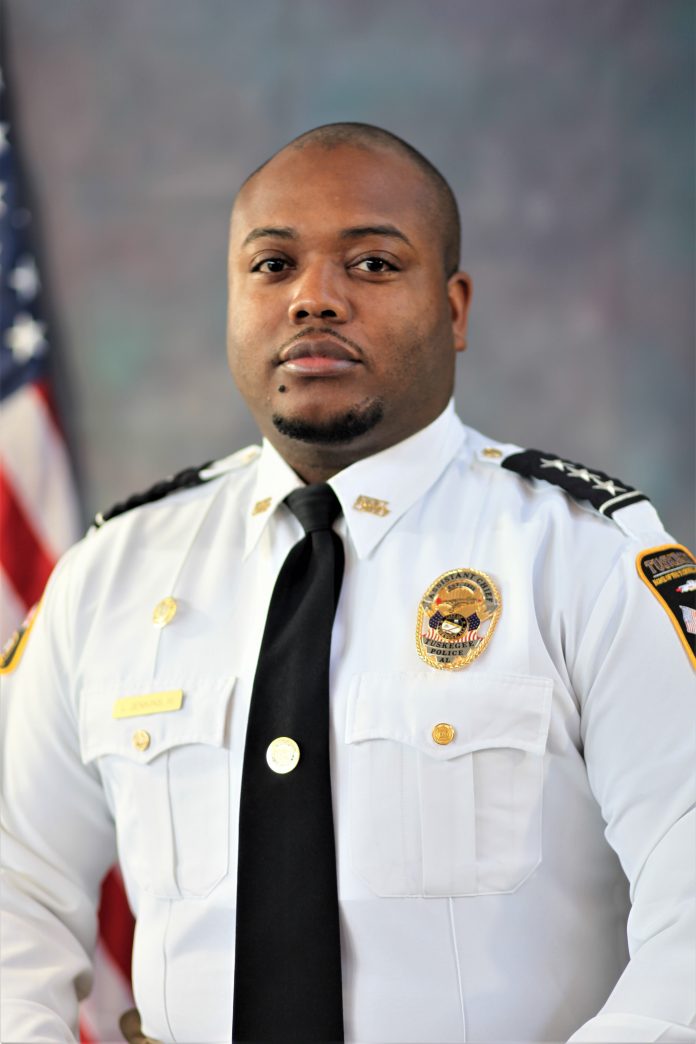 Tuskegee, AL- City of Tuskegee Police Chief Loyd Jenkins, III is in the beginning phases of bringing innovation and transformation to the Tuskegee Police Department (TPD). He has several initiatives in place to move the department forward.

One initiative is Blue Table Talk, a weekly live talk show that airs via Facebook Live. The show can be viewed on the department’s Facebook Page. Different law enforcement officers and community leaders discuss and give insight on various issues. Public service announcements and other updates are also shared. Chief Jenkins says that this has helped the department tremendously. “We have seen our interaction with the public increase. This is a new gateway to build community interaction.”

Chief Jenkins joined the Tuskegee Police Department in 2018 to serve as Assistant Police Chief. He was appointed Police Chief in January of this year.

Since being with the department, Chief Jenkins has been involved in community service. One of the first programs implemented when he arrived was Bridging the Gap, where TPD partnered with a local grocery store to giveaway bicycles and food to families. TPD has also hosted several back-to-school drives. In 2019, TPD partner with Macon County to host the city’s first National Night Out. Chief Jenkins says that it was a great success and over 300 people came out.

“Anytime there is a community event we try to be involved” Chief Jenkins passionately shared. “I am looking forward to doing more things and hopefully we will be able to have a National Night Out this year.”

In addition to community engagement, Chief Jenkins plans on using technology to not only help combat crime, but to also help the department operate more effective and efficiently. “We are going to install security cameras in certain areas of the city” Chief Jenkins said. “This will help to deter a lot of crime.”

With technology in mind, the ultimate initiative is to upgrade the police department. “My goal is to have a state-of-the-art facility that would be a central hub for development and training throughout the state” Chief Jenkins said. “This will be better for the whole county. We will be setting a new standard.”

These initiatives are helping the department overcome one of its greatest challenges of recruitment. “Recruitment is a challenge, and we have to change our reputation” Chief Jenkins said. “We want the community to see police as someone that will treat them right and fair.”

The COVID-19 pandemic presented even more challenges, but Chief Jenkins says that the department was able to work through it. Work vehicles and office space areas were kept sanitized.

There are some things that we can expect to see from TPD that Chief Jenkins is excited about. First, he announced that he will be forming an Honor Guard Unit to participate in community events. He also announced a partnership with The Tuskegee Community Development Center to host the Literacy Explosion on April 17th, a reading initiative encouraging students to read more. Chief Jenkins is also excited about the new police badge, which incorporated the Red Tails. “Our city is rich in history and I want to make we continue its legacy and be a transcending gateway for all cities.”

The Tuskegee Police Department is currently located at 1106 Notasulga Road. You can reach them at 334-727-0200 and follow their Facebook page. You can also contact them via the Nextdoor App.