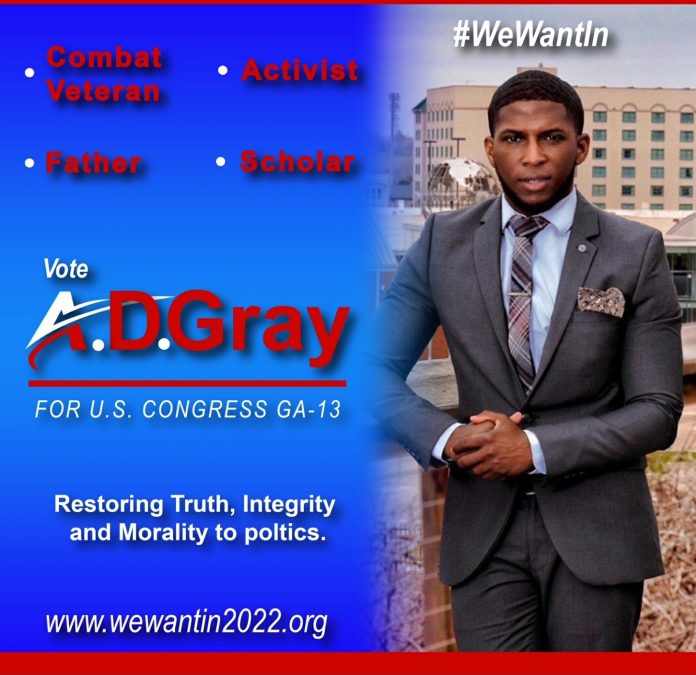 Atlanta, Ga, 11/5/2021- Every Halloween weekend, hundreds of pageant enthusiast and members of the LGBT community come together to see who will be crowned the next Mr. and Miss Black Universe (MBU). MBU, for many, is one of the biggest fashion social events of the year. The contestants are considered to be the crème de’ la’ crème of the industry and if successful become top tier veterans in the craft.

After a hiatus due to Covid-19, a crowd of over one thousand gathered for this year’s event. After the evening gown competition, Cameron Black (Mr. Black Universe 2013), took the stage to re-introduce himself to the massive audience. He presented himself as A.D. Gray and after giving touching words about his recovery from a near fatal accident, he announced that he is running for United States Congress for Georgia’s 13th Congressional District.

A.D. is political newcomer. He is a native of Montgomery, Alabama where many know him as “Cam Gray.” A.D. moved to Atlanta in 2010 upon graduating from Alabama State University where he majored in Political Science. He worked as a paid intern at Atlanta City Hall in the office of City Council Woman Felicia Moore, who is currently in a runoff to be Atlanta’s next Mayor. He went on to work as a Youth Instructor for The Agape Center. He is a Combat Veteran, father, activist, and scholar. He obtained a Juris Doctorate degree from Jones School of Law in 2018 and is currently working on his Public Leadership Credential from Harvard’s Kennedy School of Government.

A.D. is running to restore truth, integrity, and morality back into politics. “I think lawmakers are in perpetual power struggles, to the point where little to nothing gets done for the average citizen,” says Gray. He goes on to say, “. . . we cannot allow lawmakers to continue to minimize our real-life hardships and traumas down to mere partisan politics.”

The incumbent, David Scott, 76, who has been in this seat since 2000, is a lifelong politician and has largely ran unopposed. It was recently revealed that Scott, like many in Washington, has received millions of dollars from Wall Street to fund his campaign over the years. “It is time for a new generation of leadership,” says A.D.

“Young people have been taught to stand up for what they believe in but are often dismissed especially in the realm of politics. WE WANT IN, my campaign slogan, is meant to be inclusive of every marginalized group that is typically undeserved, unheard, unprotected and misrepresented.”