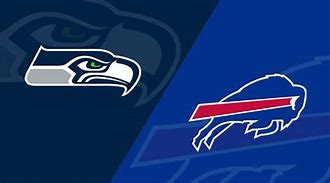 This week I thought the most interesting game would be the Seattle Seahawks versus the Buffalo Bills. I thought this would be the most interesting game because of what these teams have to offer on the offensive side of the ball, and both teams are solid on defense as well. Looking at this game from a playoff standpoint is really pointless because they are in two totally different divisions. Lastly I will provide stats from the game and talk about some notable performances from this high scoring game.

The Buffalo Bills defeated the Seattle Seahawks this past Sunday by a score of forty four to thirty four. This game was an offensive explosion as the teams combined for a total of seventy eight points. The Seahawks came up a little short behind their MVP frontrunner quarterback Russell Wilson. With one of his usually MVP performances the Seahawks came a defensive stop from winning the game. On the Bills offensive firepower it all starts with second year quarterback Josh Allen. Acquiring superstar wide receiver Stefon Diggs over the offseason looked like that was all they needed to push their offense over the top.

As far as the playoffs these teams will never see each other because they are not in the same division. The only way they could see each other is if they both make it to the Superbowl, which I think could be more likely than we think. Even though the Seahawks lost today I feel they are the more complete team. Which in turn would give them a better chance of getting to the Superbowl. Lastly I will talk about my most notable performances of the game. Josh Allen put on a quarterbacking clinic tossing three touchdown passes, and a rushing touchdown. He also threw for a total of 415 passes, while only throwing seven incompletions out of 38 attempts.

This game was very interesting to me because these offenses are so similar. They both rely on good quarterback play each and every game. They both have game changing receivers in D.K. Metcalf(Seahawks) and Stephon Diggs(Bills) that can win a game for their team. I also feel both of these teams have underrated running games with is a key factor to going deep in the playoffs at this level of play.