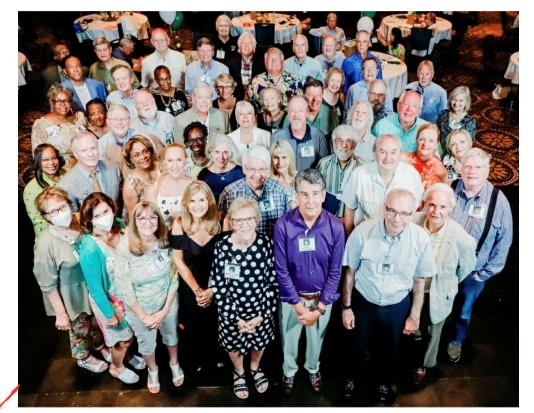 Yes. 50 years is a very long time. And people had changed. Some 60-plus people had even passed away. That’s why 1971 graduates of Jefferson Davis High School thought it was so important to celebrate their 50th high school reunion, together, face-to-face, for those who could. For those who couldn’t, a virtual option was provided. About 100 class members and their guests gathered at the RSA Activity Center for fun, good food, and renewing valued friendships.

The decorations committee did an exceptional job making the reunion venue festive, welcoming, and reflective of the school’s colors; Jefferson Davis memorabilia was placed in strategic locations throughout the buffet hall and into the dining ballroom; and a photo booth was set up that enticed jokesters to group up and capture some light-hearted keepsakes.

“Our planning committee was so gratified to see classmates from as far away as Livermore, California and Austin, Texas, make the effort to come this far to reminisce with classmates they hadn’t seen for years—for some, 50 years!” said Shep Thornbury, first drum major at the new Jefferson Davis High School and reunion committee co-chair.

In addition to the actual reunion party, Class of ‘71 graduates were invited to play golf, visit the Legacy Museum and National Memorial for Peace and Justice, and/or tour their high school alma mater in the hours leading up to the evening festivities. At 6:00 a special program began, which featured a welcome, invocation, and emotionally moving resolution crafted by ’71 Graduate Dr. Margaret Allen, retired Montgomery Public Schools superintendent who called JD a “unique setting for academic prowess, racial integration, athletic competence,” and
“an open arena for independent expression, strategic problem solving, and high aspirations . . ..”

To get a laugh out of the crowd, funny but legitimate certificates were awarded to classmates who traveled the farthest, had the greatest number of children and grandchildren, became a published writer, remained the fittest, remained the most glamorous, served in the education system the longest, moved most frequently, enjoyed the longest standing relationship, and others. Also honored with certificates were the teachers and coaches in attendance. Principal Jack Rutland and JROTC Instructor Roy Reddock were honored posthumously.

One highlight of the evening was an exciting announcement that the Class of ’71 is establishing a Hall of Fame program to honor former Jeff Davis graduates who have achieved major milestones in their lives and careers, and to inspire current and future JD students to reach for their dreams. Leaders of this effort, Peggy Howland and Beth Stewart, proudly announced that the inaugural inductee into Jeff Davis’s first Hall of Fame class was JD Class of ’71 Graduate Dr. Roger Hudgins, a world-renowned pediatric neurosurgeon practicing in Atlanta, Georgia, and other sites across the country. He has saved the lives of countless children across the world. theatre credits continue to grow at an astounding rate. Unable to connect with her Dr. Hudgins was moved to be chosen for such an honor. “I will honor this award for the rest of my life and appreciate the confidence that you and the rest of the committee had in me,” he said. The Hall of Fame committee will work in coming months to establish an operational framework for this project to ensure it is sustained in years to come.

With this, the guests flowed into the buffet area where appetites were whetted by serving dishes piled high with teriyaki chicken skewers, Conecuh sausage bites, meatballs, Greek shrimp, antipasto kabobs, stuffed new potatoes, green been bundles, beautiful fruit, cheese, and vegetable displays, chips and salsa, and to cap it off, a spectacular cake decorated in green and gold and school-inspired confections.

The evening ended with rousing renditions of the JD fight song and alma mater and a class picture.