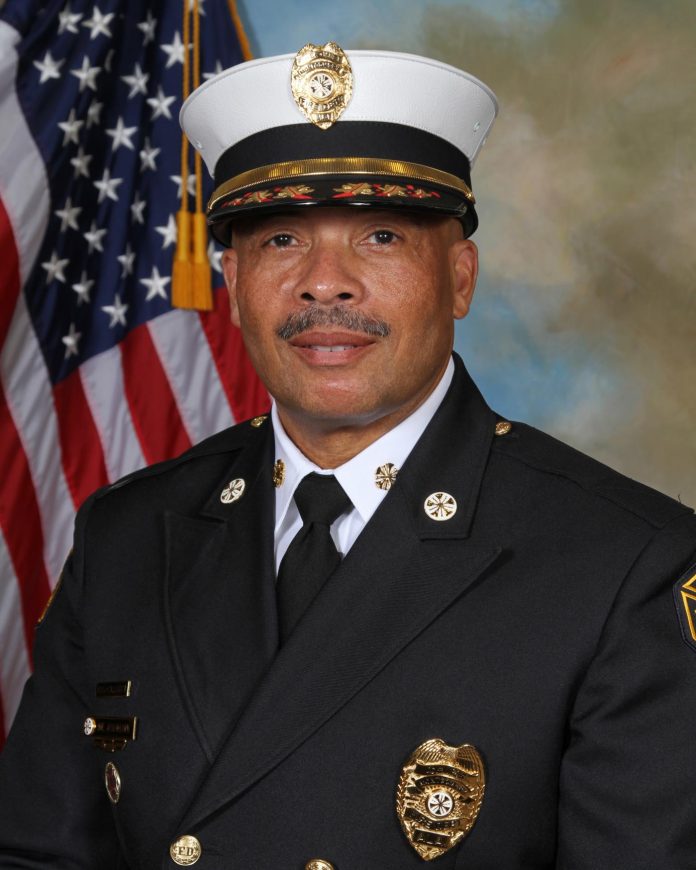 Montgomery Fire and Rescue Chief Miford Jordan was born and raised in Lowndes County, 39 miles south of Montgomery. He has been married to his wife Carolyn for nearly 40 years and has a daughter, Andrea. Chief Jordan and his family lived in Greenville and worked in Fort Deposit until someone told him that the fire department in Montgomery was hiring.

While Chief Jordan was interested in finding a new line of work, he had never thought about being firefighter as a career choice before hearing about the open position at the Montgomery Fire and Rescue Department.

“It was rough and a challenge. I’d never thought about being a firefighter in my whole life. I never considered it being a career. I never heard anything about the fire department, especially on the professional side. I’d see a fire truck in my little town, but I’d never been in one until I got to Montgomery,” Jordan said.

From the time that Jordan joined the Montgomery Fire and Rescue team, he applied himself and moved quickly through the ranks. In 1995, Jordan became the District Fire Chief and in 1997, he was promoted to Deputy Fire Chief. For ten years as Deputy Chief, he focused on improving his leadership and management skills with a commitment to improving the services available to the citizens and the quality of training and safety available to the Montgomery Fire and Rescue firefighters. In 2006, Jordan was appointed Fire Chief by former Mayor Bobby Bright.

“We’ve done so many things [during my time as Fire Chief]. Let’s start with our training; we’ve always been known as a department that trained hard, but we came in and redefined how we trained. We started doing professional training, meaning that all members in our department from the rank of lieutenant up, close to a few hundred members, go to the National Fire Academy for a one to two week training.

“Our inspectors who go out and check routine fire codes and safety items in buildings are also professionally trained by the state and hold state and national certifications. By law, we have to investigate the cause of every fire; causes range from unattended food to those of criminal nature. We have some of the best fire investigators around. Our investigators are first firefighters; they go through the Alabama Peace Officers Standards and Training Commission (APOSTC) with the police academy as well as the National and State Fire Departments to be trained. Training has been at the front of everything we believe in as a department,” Jordan said.

Physical fitness is another area of enhancement that Chief Jordan has tackled during his time as Fire Chief.

“Our vehicles and equipment go along with our training. We train hard and we have equipment to match that. We have some of the best equipment in the country. We have water rescue units, two large boats and other small water apparatus to respond and aide when called upon.

“We also rewrote every Standard Operation Guideline (SOG) that we have and are continuing to make improvements to those. There are hundreds of them, but every year we continue to make adjustments to keep up with the current demands.

“We’re also working in some other areas, such as accreditation, which will set us farther ahead of other departments in the state and in the country. We work hard on hiring a very diverse group of firefighters from all walks of life to service Montgomery. It’s been one of our top priorities to give everyone an opportunity who wants to be a firefighter and meets the standards to be one,” Jordan said.

The enhancements made under Jordan’s leadership received positive recognition around the state. In 2014, the Montgomery Fire and Rescue became the first fire department in the state of Alabama to become an Insurance Service Office (ISO) Class 1. ISO 1 is how the insurance service office rates a department’s service to the community.

Montgomery Fire and Rescue has also made amazing strides to enhance recruitment and hiring efforts. Chief Jordan aims to present the career field of being a firefighter as an option to high schoolers who might not be thinking about it as a long term career field.

“We want to hire people from all communities in the River Region. Montgomery has numerous graduating high school seniors, and college is not for everyone; this is a really great job, and I think kids are missing a lot of opportunities. Just like with me, it was never talked about that being a firefighter is a great opportunity that is available. We have to do a better job of getting out into our school systems and getting our local kids interested in being firefighters. We want to start at home first. We have close to a thousand people and graduates every year that graduate and don’t go to college. We have a place for them,” Jordan said.

“Mayor Reed has been amazing. Montgomery Fire and Rescue has achieved so much in less than 24 months since Mayor Reed has been in office. He started out by helping the Fire Department and police department adjust our Tier 1 State Retirement. He also helped with incentives for our members with college degrees. We really didn’t have good incentives for our members that have 2-year, 4-year, or Masters degrees.Then, the mayor did something really bold; he invested $16 million in city employees. That also elevated Montgomery Fire and Rescue in starting pay and gave members fair market pay for what they do. That alone will help us recruit, retain and have better employees over time. We’re able to recruit people who wouldn’t normally think of the Fire Department as a career option,” Jordan said.

In addition to being a Fire Chief, Jordan is a community influencer and advocate for service both within the fire department and the River Region.

“Our team is getting ready to compete in the annual combat challenge. Our members are also huge in giving back and gave over $23,000 back to United Way in the past year. Because of the pandemic, we weren’t able to do some of the fun things that we normally do,” Jordan said.