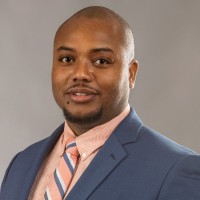 Montgomery Native Loyd Jenkins was recently selected as the new Police Chief for the Montgomery Regional Airport. In this role, he is responsible for protecting passengers, aircraft, and facilities. He leads the airport police department to meet security requirements of airport traffic direction, vehicle patrol, and detaining those who do not comply with local or federal laws. He is also responsible for implementing a comprehensive emergency response plan for the airport.

Since childhood, Jenkins had always dreamed of working in law enforcement.

“I went to Houston Hill Junior High School, and we had this program where we emulated different forms of city government. I became the Chief of Police in this program, and it stuck with me all the way through adulthood,” he said.

Jenkins started his career in law enforcement at Alabama State University before transitioning to the Police Department for the City of Millbrook. During his 11 years there, he moved through the ranks of several positions within law enforcement, including SWAT team leader, lieutenant, and shift commander. Next, Jenkins transitioned to the City of Tuskegee as the Assistant Police Chief. After two years, he was appointed the Chief of Police for Tuskegee. He moved to his current position as Police Chief for the Montgomery Regional Airport in January of 2022.

“It’s been a great transition and challenging work. Dealing with aviation law enforcement, there’s so much more that you have to take on to what you already do in law enforcement,” he said.

Jenkins currently leads a team of 17 officers and has vacancies open for a few more. His typical work day includes meetings to discuss any issues, establishing an agenda for the team, and connecting with individuals in the airport. He also spearheads the action for any in-flight emergencies that occur.

Over the next few years, Jenkins sees the airport growing tremendously.

“I think the airport is going through a Renaissance phase. We’re seeing the construction projects we had in the past come to fruition,” he said. “I think in the next few years, we’ll start seeing more airlines coming in and more flights going out.”

He also encourages people who haven’t been to the Montgomery airport to visit.

“I think people pass by and just see the outside, but there’s so much more that goes on in here. We have two military installations connected with us as well as the Air National Guard and the Army Guard. It opened my eyes when I got here to see so much more than what was apparent from the outside,’ he said.

Overall, Jenkins’ ultimate goal is to modernize the police department at the Montgomery Regional Airport.

“When I first got here, there were some things that were lagging. I’ve been able to work to get things put in place,” he said. “ I am making sure our officers are up to date on training and we are progressing as a department. I want us to lead the state; when people talk about airport police, we want to be the best one in the state.”