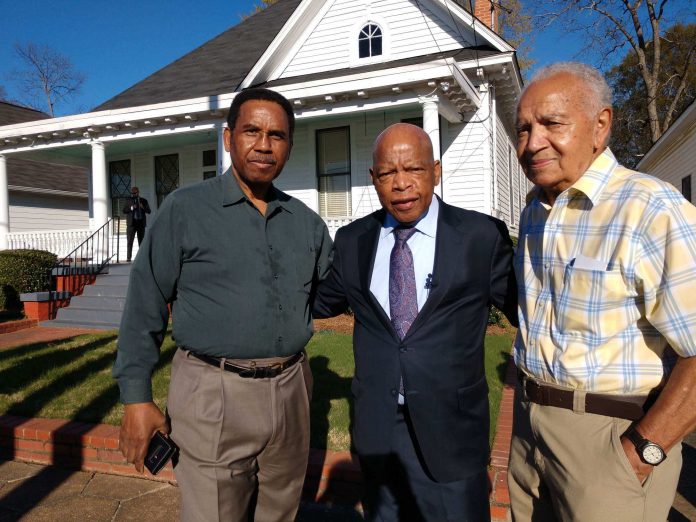 Before receiving his doctorate in history, Bailey received a joint fellowship at Cleveland (Ohio) State University and the University of Massachusetts to travel and study in Europe and Africa. Such international travel and study and a tour of Arlington National Cemetery boosted the noted historian’s later desire to showcase Montgomery’s past.

“Growing up in Centennial Hill fueled my interest in local tours,” he said. “I lived within one block of the Ben Moore Hotel, Malden Brother’s Barbershop, the Negro Branch of the Montgomery Advertiser, and one block from the homes of Georgia Gilmore, Rufus Lewis, Atty. Charles Langford, and Dr. Martin Luther King, Jr. Attending the funeral of Dr. King gave me the compelling rationale for my civil rights focus. I gave my first Martin Luther King Day speech more than 50 years ago.”

Bailey gave the city’s first Black History bus tour in 1985 for fellow members of the Dexter Avenue King Memorial Baptist Church. He also gave the first civil rights speech on the history of Centennial Hill at the Episcopal Church of the Good Shepherd Church in February 2002. Since then, he has spoken on the history of Bel-Aire and led tours of such historic local areas as Cottage Hill, Dexter Avenue, Commerce Street, Monroe Street, and West Jefferson Davis Avenue (recently renamed Fred D. Gray Avenue). His tours of Oakwood and Lincoln Cemeteries have been well received. He has also given minitours of Selma and Tuscaloosa.

“Growing up in Centennial Hill, people didn’t talk about the importance of the influential historical figures who lived in our neighborhood. I had even eaten at Georgia Gilmore’s house many times, but I had no idea that she was involved in the bus boycott. I didn’t learn about their influence until later in life,” he explained.

Bailey has devoted much of his career to advocating for civil rights awareness and educating people on the rich history in Montgomery.

For more than 30 years, Bailey served as the moderator and co-host of the Dr. Martin Luther King Jr. birthday celebrations at the Dexter Avenue King Memorial Baptist Church. In the late 1990s, radio station WXVI commissioned him to interview people in Montgomery who had been involved in the Montgomery Bus Boycott, totaling 28 people.

The noted historian has also given tours to people from all over the United States who come to Montgomery and has unveiled several historic markers in Montgomery, including the city’s first slave market marker in January 2002.

“I’m always giving speeches. I just gave a speech at Landmarks Foundation on the Alabama Constitutions of 1865, 1868, and 1875,” he said. “Over the summer, I will give a civil rights tour for the Judge Frank M. Johnson Institute to some of our junior high and high school teachers. I’m so proud that this organization would inaugurate this type of effort.

His fact-based tours are designed for people of all ages and backgrounds, from “grade school to graduate school, and from Sunday school to seminary.”

Op-ed: We can’t wait another decade: It’s time for Alabama to expand Medicaid

FASTER PROCESSING OF DISABILITY CLAIMS FOR PEOPLE WITH ALZHEIMER’S DISEASE