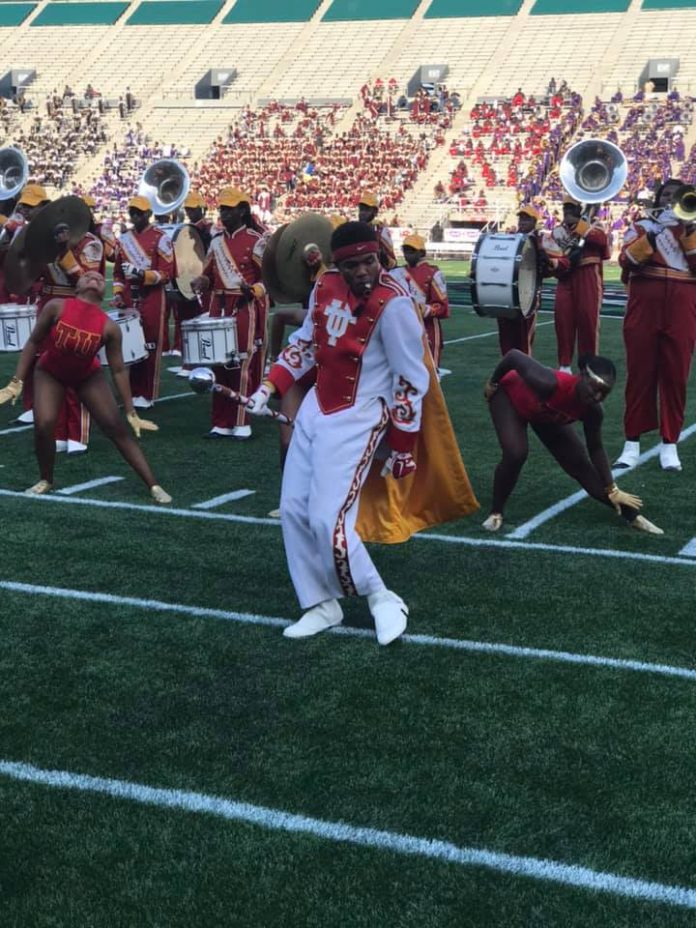 Birmingham, AL(September 16, 2019)- The 2019 Battle of Birmingham Battle of The Bands took place yesterday afternoon at Legion Field. For the first time on history, all six Historically Black College & University Marching Bands in the State of Alabama were in one place to compete, showcase their talent, and claim bragging rights as being the best band in the land.

The Battle of Birmingham included field show performances from all six college bands. There were stand battles after each field show, and the high school bands had an opportunity to play with the colleges.

Rickey Smiley of the Rickey Smiley morning show hosted the event. A Birmingham native, Smiley is a college bandsman. He marched in the Tuskegee University Marching Crimson Pipers Band in 1987.

The Tuskegee University Marching Crimson Pipers took the field first. After their performance, there was a stand battle between The Alabama State University Mighty Marching Hornets and The Alabama A & M Marching Maroon & White. The crowd went while because the two schools are archrivals and they battle each other every year for the Magic City Classic at the same field.

Alabama State also had a stand battle with Talladega College. Rickey Smiley was amazed at the size of The Talladega Marching Tornado Band. “Y’all got a lot of tubas” he said. Talladega had a total of 27 tubas. They also had support from a fan bus of students. Alabama State responded by playing hot song “Ol Town Road” by Rapper Lil Nas X. The crowd sang along.

Stillman College stunned the crowd with their field show. They had a very clean sound and soothed the crowd when they played “A House is Not a Home” by the late Luther Vandross.

The battle became more intense and the unexpected happened. Right before Alabama State performed their field show, there was a stand battle between Miles College and Alabama A & M. Miles College was up to play first. Then Alabama A & M came straight in blasting before Miles College could get out there first note. The two kept going back and forth, even while Rickey Smiley was asking them to stop. Next thing you know Stillman College started playing, followed by Talladega. These four bands were playing at the same time while Alabama State was on the sidelines waiting to start their field show!

The DJ started to play music to stop the bands from playing but that didn’t seem to work. The stand battle lasted for almost 30 minutes and Rickey Smiley was finally able to calm down the bands and keep the crowd entertained. “Some people have to go to work tomorrow” Smiley told the bands as the crowd laughed. “I have to be on the radio at 4 in the morning.”

Alabama State decided to leave the battle after their field show performance. There more stand battles between the remaining schools and Talladega, Alabama A& M, and Miles each performed a field show.

The event was organized by Eddie Evans, owner of MeetMeOnThe50 LLC, a band media company.  Mr. Evans was a bandsman himself, serving as Drum Major at Morgan State University in Baltimore, MD.  He would later start Meet Me On The 50 LLC, YouTube- based platform that hosts virtual band battles and live reactions. “The idea to organize the Battle for Birmingham actually came from one of my virtual battles hosted on my channel about a year ago.  It’s amazing to see this virtual concept come to realization and I’m very excited to bring this major event to the state of Alabama.” Evans said.

May I Be of Service?